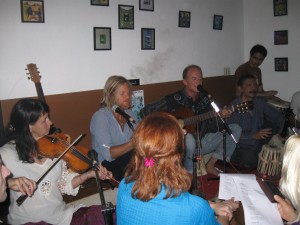 On Wednesday, December 12, 2012, the eve of a New Moon, we had an amazing Kirtan in Mysore with myself and yogi Mark Robberds. It was a benefit for the orphanage of Ashaayaka Seva Trust in Mysore. The room was packed and people were even out on the patio dancing and chatting away. Julie Southwell on violin, Ganesh and his son, Bharat on percussion. True to our “Hippie Campfire” of kirtan, we played and sang many of the traditional Greenpath kirtan chants, but at the end of the night when we played  Beatles songs: All Across the Universe, Imagine and My Sweet Lord, the crowd went nuts! we ended the night with Om Lokah Smastah….with everyone joined arms, hugging in a big “share the Love” moment. It was great to have a full on sound system with 5 microphones to power over the outside of the  room chatting – and in true Indian style, we had no electricity until we started to chant to Ganesh at the beginning of the night.-) I call it a “Hall of Famer” since it was one of the most spirited kirtans I can remember. Hopefully the Kirtan with Mark & crew this Friday Dec. 21, 2012 will be a high vibe as well.
OM Shanti~